Plant a tree in memory of Robert "Bob" W. Spoede
An environmentally-friendly option 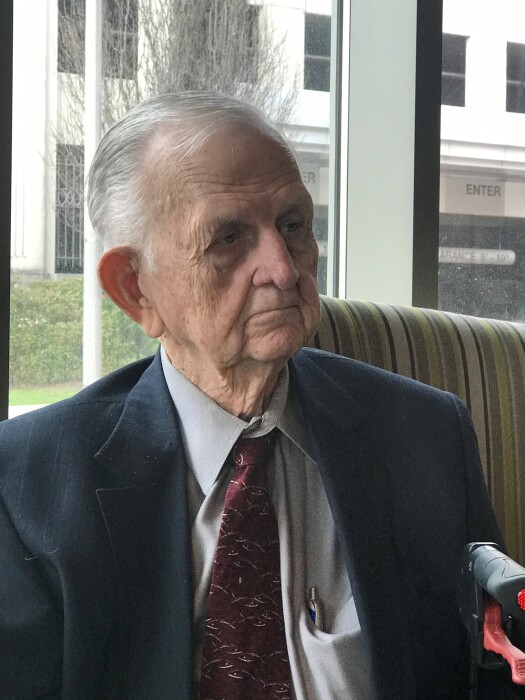 Robert (“Bob”) William Spoede died March 16, 2021 at home surrounded by his children, grandchildren and great-grandchildren. He will be interred in the Spoede plot at the Wallis, Texas municipal cemetery. He was the third of three sons, born on October 1, 1926 on a cotton farm outside Wallis, Austin County Texas, to Herman Henry Spoede and Elizabeth “Bess” Guyler Spoede. He attended public schools in Simonton, Lufkin, Waco, Marshall, and Forth Worth, and San Antonio. Following graduation from Thomas Jefferson High School in San Antonio, he enrolled in the Agricultural and Mechanical College of Texas (Texas A&M University) in June 1944. In August 1944 he enlisted in the United States Marine Corps and was called to active duty in January 1945.

Upon discharge in August 1946 Bob re-entered Texas A. & M. Upon graduation in June 1949, he accepted a commission in the United States Army. Bob married his beloved wife, Nancy Alice Groves, on February 8, 1954 in Beaumont, TX. They remained married until she went to be with her Lord on March 2, 2011.

During his career in the Army, Bob served six years in Germany, 16 months in Korea, and a year in Vietnam, receiving the Bronze Star for Meritorious Service, the Combat Infantry Badge, and the Army Commendation Ribbon twice. While in the Army he gained a Master’s degree in history at Hardin-Simmons University.

Following his retirement from the Army he enrolled in the doctoral program in history at The College of William and Mary in Virginia, receiving his Ph.D. in Early American History in 1973. He taught history for one year at Mackinac College, Mackinac Island, MI, and for 19 years at William Jennings Bryan College, Dayton, TN.

In 1991 Bob returned to College Station, TX following retirement from teaching. While there, he was active as leader of Los Brazos de Dios Men’s Bible Study, chair of the Resolutions Committee of the Brazos County Republican Party, a delegate to the Republican Party State Convention, chair and a member of the Brazos Valley board of the Fellowship of Christian Athletes as well as the president of the Brazos County adult chapter of that organization. Bob and Nancy were also highly active in the organization Officers Christian Fellowship throughout their military career and in retirement.

In addition to his master’s thesis and doctoral dissertation, Bob’s writings included the publication of More Than Conquerors: A History of the Officers’ Christian Fellowship of the United States, 1944-1984, the novel Double Identity: A Texan in Hitler’s Reich, and a biography of C.N. Tokatloglou entitled We All Knew a Little Greek.

Bob moved from Texas to Everett, PA in 2017 to be closer to family as well as to White Sulphur Springs, a retreat center owned by Officers Christian Fellowship.

Bob is survived by a son, David L. Spoede of Schellsburg, PA; two daughters, Rebecca “Becky” Parker of St. Francisville, LA, and Paula Halvorson of Manns Choice, PA; nine grandchildren; and 18 great-grandchildren. Bob is greatly loved and missed by all his family and his many friends.

Donations in lieu of flowers may be made either to Officers Christian Fellowship in Englewood, CO, or William Jennings Bryan College in Dayton, TN.

A service summary is not available

Plant a tree in memory of Robert "Bob" W. Spoede
An environmentally-friendly option

Plant a tree in memory of Robert "Bob" W. Spoede

Dear Paula, Art and family,
I was so very sorry to hear of your father's death.  I was happy to hear he was close to you the last few years.  I know you enjoyed that.  Please know that our thoughts are with you.  Praying for healing.


Also, thank you so very much for your donation on Go Fund Me for Sheldon.  You are welcome at our home any time.

A Memorial Tree was planted for Robert "Bob" W. Spoede

Plant a tree in memory of Robert "Bob" W. Spoede